Jacob Farley draws on some abs and charges into battle against the Zack Snyder/Frank Miller swords-and-sandals actioner 300 in this week’s look at the cinema of 2007.

Watching Zack Snyder’s 300 is like being slapped in the face with a steak—it is obnoxious, painful, and a waste of perfectly good beef. It’s a monument to style rather than substance, and a howling paean to the triumph of violence-as-philosophy. Buckle up, my friends, for tonight we dine in hell!

300 was Zack Snyder’s second film after his 2004 debut, the actually-pretty-good remake of Dawn of the Dead. That movie remains a lot of fun even to this day, and I wish I was reviewing it instead. 300, by contrast, is when the particular tics and obsessions that would come to characterize Snyder’s work started to become evident—a love (LOVE!) of slo-mo, a fascination with “cool” violence, and a fetishization of physical powerful and masculinity. Over the years, my opinion of this film has evolved from mild positivity to mild irritation to outright dislike, but these days it just makes me tired. It is like a carton of milk left in the school’s heating ducts over Christmas break—what was once a refreshing treat now curdled into an unpleasant sludge of chewy bits and fetid odors.

I was 23 when 300 first came out, and I was starting to struggle with some of the implications folded into the work of Frank Miller. Miller, you see, is the author of the comic book (sorry, I mean GRAAAAPHIC NOOOVEL!!) upon which 300 is based. He’s famous for his groundbreaking work in the ’80s, particularly on the landmark Batman story Dark Knight Returns, but he’s also the author of the Sin City comics, a significant run on Marvel’s Daredevil, and a number of other things. He’s also somewhat infamous for his…interesting…opinions of women and, more recently, Islam and the Middle East. Keep that in mind, because it’s going to become relevant later.

Anyway, the plot of 300 is very simple—the big bad army is coming and only 300 Spartans (plus like 700 other guys, but they’re not Spartans so who cares about them) can stop them!

If you insist, we can go into a little more detail. Gerard Butler plays Leonidas, the leader of the Spartan city-state in ancient Greece. The Spartans, as the movie will endlessly remind us, value only the ability to kick hella ass. The movie opens with a little flashback of Leonidas’ childhood, which mostly involved Baby Boy Fight Clubs and stabbing wolves to death, because the Spartans are so awesomehardcorebadass. The movie also takes this opportunity to point out that any child born to Spartan parents who is, uh, “imperfect” in some way gets chucked off a cliff as an infant. They are not big on compassion, the Spartans.

Anyway, one day, King Leonidas is busily punching his son in the face when a mysterious rider (Peter Mensah) appears. The rider is a representative of Xerxes (Rodrigo Santoro), the self-proclaimed God-King of the Persian Empire. The rider has come to ask if the Spartans wouldn’t mind maybe please letting themselves be conquered by the Persians. Leonidas doesn’t play like that, though, and kicks the unfortunate fellow into a handily gigantic well in the middle of the city. Presumably someone fishes the messenger’s body out later, otherwise everyone’s water is going to taste funny for a while. 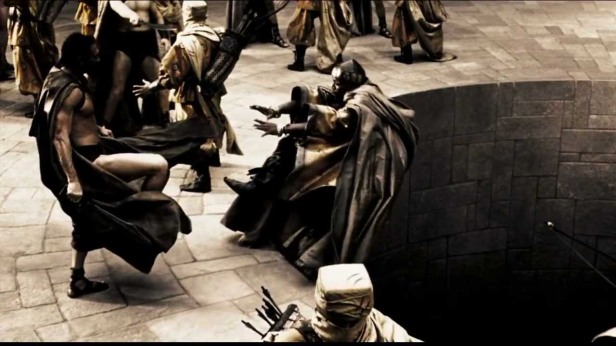 Leonidas knows the Persians are probably going to be mad about that whole shooting-the-messenger business, so he tries to get permission from his bosses (who are a bunch of syphilitic old perverts for…some reason) to rally the Spartan army and go to war. It’s almost Spartan Mardi Gras, though, so the creepy old pervs have to ask their magic teen girl to determine whether or not war is acceptable. She dances out the future in her wet T-shirt, and decides that it’s more important to get hammered on leaded wine than to prevent a rampaging army from destroying the city, so that’s a no-go on the war, sorry Leonidas. At least, I think that’s what she said—I’ve never been good at interpreting dance (I fell asleep at The Nutcracker a few Christmases ago), so I’m depending on the translation from the green-skinned old man who licks the magic dance teen’s face.

Sidenote—there are exactly two women in this movie, only one of whom has any actual lines, and they’ll both be sexually assaulted before the film is over.

After Leonidas leaves, a representative of the Persian army shows up and gives the old perverts a sack full of gold, because they’re bad and corrupt and selling out Sparta. They’re also never mentioned again, though, so whatever.

Not having received the appropriate congressional authorization to declare war on the Persians, Leonidas decides instead to take his perfectly sculpted beard and his “personal bodyguard” of 300 very manly, very in-shape, very under-dressed Spartans to the Hot Gates to hassle the Persians. Despite what it sounds like, the “Hot Gates” is not some kind of sexy euphemism—it is, instead, a small mountain pass through which Xerxes’ army will need to travel. Because the Spartans are just such amazingly manly, straight, tough, manly, VERY straight, tough solider boys, they believe they can delay Xerxes long enough for everyone in Sparta to finish partying, recover from the hangover, and go help stop the invasion.

The Spartans meet up with some other Greek guys, but it turns out those guys suck because they also know how to do things like cook and make clay pots, whereas the Spartans know nothing except how best to stab someone until they die. The Spartans laugh at them for being so stupid, but let them tag along anyway because you never know when you might need a new clay pot. They also meet Ephialtes (Andrew Tiernan), a hunchbacked Spartan whose parents fled when he was born rather than throwing their baby off a cliff. Ephialtes would like to help fight the Persians, but Leonidas patiently explains to him why he will never be allowed to do so (basically because Ephialtes can’t hold his shield properly and the shields are so important to Spartan military power, except for all the times later in the movie when the Spartans just abandon their shields to leap all over the place). Ephialtes freaks out and immediately goes to betray Leonidas to the Persians, which seems like a…weird message to send to the audience.

A bunch of fighting happens. Eventually Leonidas has a little chat with Xerxes, who turns out to be like 10 feet tall and draped in gold chains. He’s also a bit handsy, and has a voice like James Earl Jones speaking into one of those Darth Vader voice machines. Between Xerxes’ behavior and Leonidas’ earlier crack about Athenians being “boy lovers” (the movie is here ignoring Sparta’s historically documented enthusiasm for same), the movie pretty clearly has some strong feelings about queerness. They’re not good feelings, either, despite the movie simultaneously going out of its way to highlight the very sexy beefcake on display at every possible opportunity.

Meanwhile, in a mind-bogglingly dull B-plot back in Sparta, Leonidas’ wife Gorgo (Lena Headey) is trying to get everyone to go help her husband. I thought there was supposed to be some kind of festival going on, but it seems pretty quiet around town. She’s informed that if she can get the senator Theron (Dominic West) on her side, then Sparta will commit its forces and go save Leonidas. Theron agrees to help Gorgo if she lets him rape her, because this is that kind of movie. She acquiesces, but he then tries to badmouth her to the senate as an adulterer because he’s just an overall asshole like that. She stabs him in the actual dick right in front of everyone and he dies. All the senators seem pretty cool with that, since it turns out Theron was also on Xerxes’ payroll, but they still don’t actually send any reinforcements to Leonidas.

It’s pretty much all over except the crying at that point—Leonidas’ forces get overwhelmed and, one by one, his parade of interchangeable hardbodies are killed. They make a desperate last stand and manage to cut Xerxes’ face with a spear, which I guess is kind of a triumph because they prove he’s not really a god, but the Spartans are all too full of arrows to enjoy the moment.

The movie ends with Dilios (David Wenham—his character lost an eye midway through the battle and Leonidas sent him home to tell everyone how cool and awesome Leonidas was) telling the story of the “brave 300 (and don’t mention the other guys)” to a bunch of soldiers who are gonna now go beat up those nasty Persians real good.

Woof. This movie has a lot going on, almost none of it pleasant. Everyone is a hyper-aggressive jerk all of the time, it’s more than a little racist, homophobic, sexist, and ableist. It almost feels pointless to note that, so deeply is the movie steeped in all of that. It’s not even really historically inaccurate in that (the Spartans really DID toss those babies off cliffs), but that makes it no more pleasant or palatable to watch. A lot of lip service is given to Sparta being some kind of beacon of freedom and liberty, and the Persians are supposed to be tyranny personified, but we don’t actually see any of that in the movie. Instead, we just get two groups of violent maniacs hacking each other to pieces in a curiously bloodless manner (seriously—despite all the decapitations and limb-hackings, the ground upon which the battle takes place over the course of three days remains dusty and easy to walk on), with no real reason to care whether one side or the other wins. Indeed, by the end of the film I had started rooting for the Persians, if only because they seem like they know how to have a little fun.

Oh, also, a lot of the Persians are actual monsters for some reason—there’s a big demon guy with sword-arms, Leonidas fights a giant, and when Xerxes’ elite forces lose their scary silver masks, they look just like the orcs from Lord of the Rings. In fact, this entire movie is basically like someone looked at the Lord of the Rings and decided to cut out all the shit about hobbits and friendship and compassion and replace it with hardbodies and misogyny.

Look, a lot of people like this movie. That’s fine, I can’t control everyone’s thoughts (yet), but looking at this thing ten years later, it’s shocking how popular it was. It feels hollow and sad, like a plaster garden statue of Michelangelo’s David. It left a bad taste in my mouth (unlike the delicious fajitas my wife made for us while we watched the movie, which were the only good thing I experienced in that two-hour timeframe), and by the end of the movie I was just tired. Tired of the posturing and the scowling and the emptiness of the whole endeavor. To borrow a phrase from a more accomplished writer, 300 was a spectacle of sound and fury that, in the end, signified nothing at all.