Stevi Costa crusades against Ridley Scott’s Kingdom of Heaven in this week’s 10YA. 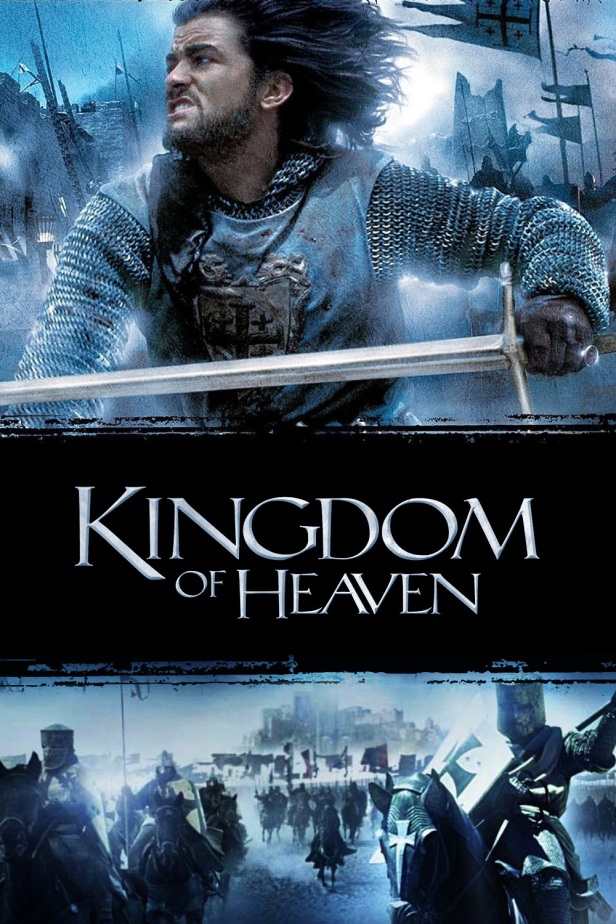 10 years ago, my husband, the esteemed editor of this here website, graduated from college. After his graduation ceremony, we decided to go to the movies, because that’s what we did all the time back then. So we drove over to some fancy movie theatre in L.A. and watched Ridley Scott’s swords and Saracens crusades epic, Kingdom of Heaven.

I remember being pretty entertained by this film back in 2005. Specifically, I distinctly remember the scene in which King Baldwin forces someone to kiss the ring on his leprosy-afflicted hand, calmly insisting, “I am Jerusalem, and you will give me the kiss of peace.” This is a great scene because you know the sack of shit dude he’s forcing to kiss his hand is essentially being executed, but slowly and painfully, which just seems like an extremely awesome form of justice. It’s also a great scene because after Baldwin receives the Kiss of Peace, he cold-cocks the dude hella hard, and it’s so awesome that you definitely want to slow clap King Baldwin.

So, in retrospect, I found one scene really entertaining, because I just rewatched this and I honestly can’t tell you what happens in this film.

I mean, there’s a plot. But it’s not very interesting. It goes something like this:

Qui-Gon Jinn and Remus Lupin try to convince Legolas to go to Jerusalem and work as a blacksmith since everyone he knows and loves is dead. At first, Legolas refuses because he has just barely buried his wife and child and is still in mourning. However, his colleagues at the smithy seem fond of mocking his pain, insisting that his deceased wife is burning in hell as a result of her suicide. This clearly pisses Legolas off, so he straight up lights a priest* on fire with a molten sword, then burns his entire business down and rides the fuck to Jerusalem.

Once he gets there, he somehow gets enlisted as a Knight to fight against the Muslim army for control of the city of Jerusalem. He does this because Qui-Gon Jinn asks him to, but mostly because Vesper Lynd is the Princess and she’ll totally fuck him if he takes the job. Her brother is the aforementioned Leper King of Jerusalem, who is secretly played by Edward Norton, and once he dies, she gets to be Queen of Jerusalem and make all kinds of decisions about who gets to run things. She maintains her relationship with her boorish French ex-pat husband and makes him King, naming Legolas the Knight in Chief of Jerusalem.

Then there are lots of battles, and the Christian Army eventually calls a kind of truce with Saladin, who allows them to leave the Holy Land safely in exchange for control of the City of Jerusalem. Vesper Lynd renounces her claim to the Queendom and cuts off all her hair, and she and Legolas lead their people out of the desert together.

I’m pretty sure the only reason I agreed to rewatch this is because I am narcissistic enough to enjoy watching Eva Green films simply because it’s like watching my own face for two hours. To her credit, she’s very good in the film, especially considering what little she has to do. Her entire job in this movie is basically to eyefuck the shit out of Orlando Bloom, and she’s so good at eyefucking people that she can do it while she’s drinking a glass of water. I also thought I remembered a pretty steamy sex scene between Green and Bloom, and was disappointed to realize that I’d only imagined it. It might actually exist in the director’s cut of the film, which apparently is a masterpiece in which drama and character development occur, but I’m so bored by the theatrical cut that I don’t think I’ll bother to watch the director’s cut for another ten years.

The theatrical cut of the film seems to cut out all story in favor of extended battle sequences, which I just plain don’t get. It’s exciting to watch Legolas shank a dude who insults the memory of his dead wife, but the ensuing battle that happens on the road to Jerusalem left me wondering why it was happening at all. But then again, I felt the same way about the climactic crusade against Saladin, and that was ostensibly where the scrap of a plot was building toward all along.

I just don’t get battle sequences, you guys. I don’t find them interesting to watch. They’re always shot in such a way that it’s nearly impossible to keep track of characters and actions. On the one hand, I recognize that this situational confusion is intended to replicate the situational confusion of battle, but on the other hand it makes me as a viewer angry. Fantasy films and epics are particularly guilty of directing battle sequences in this confused way, and I dislike them with equal measure. The climactic battle in Kingdom of Heaven, in fact, looks an awful lot like the Battle of Helms Deep in LOTR: The Two Towers. I think the visual comparison I’m trying to make between the way battle sequences are filmed in historical epics and in fantasy films is intended to point out that the idea of the epic itself is a fantasy version of history, and therefore I don’t tend to think that there’s much weight to the deaths I’m seeing onscreen. Certainly, the film doesn’t allow us to think about the weight of these deaths as the point is to see bodies fall on all sides, and not to dwell on what the consequences are. I have a similar dislike of freeway chases in action films because I think about all the other cars on the road that get destroyed and the people driving them who are maimed/killed as a casualty of the action sequence. And it seems odd to me to begin a narrative with someone who cares a lot about the death of his wife and child, and end it with a giant battle sequence full of inconsequential bodies. I think only WWII movies, as a genre, spend time showing us the aftermath of battles, usually with a wide shot of the battlefield so that the viewer can take in the enormity of the amount of lives lost. I prefer that, not because it’s entertaining, but because it provides a particular sentiment to the viewer about why we should be watching what we just watched. Battles in fantasy films and epics do not do this for me, and I’m always left wondering why.

So ten years later, I definitely don’t enjoy Kingdom of Heaven. I barely find it fun, and I know I found it fun ten years ago. Eva Green is still the Queen of Eyefucking, and Edward Norton’s performance as King Baldwin is still one of the greatest things ever committed to film. But other than that, I guess I just don’t get epics.

I also think maybe it’s not cool to make a movie in 2005 that vilifies Muslims, even if you’re doing it in such a way that’s trying to use history as a political allegory for the contemporary world. Like, I think maybe that’s just in poor taste all around.

Eva Green is definitely pulling off this Saracen Princess look in this film, which means I could totally pull off this look. But I won’t because that’s cultural appropriation!

Liam Neeson would either be the best GPS or the worst GPS, given his advice on how to find Jerusalem: “Go to where the men speak Italian, and then continue until they speak something else.”

*IMDb tells me that the priest is Legolas’ brother. This was totally unclear in the film.