For our second re-view this week, we hand the reins over to Sara Miller, Senator Snorlax of Sasquatch Says Hello Greeting Cards, Chief Beast at the blog The Curious Beast, and a rootin’ tootin’ space cowgirl from Seatle, WA. So of course somebody that awesome would want to rewatch American Splendor. Enjoy!

At sixteen, I was a handful for all of the wrong reasons. I moped a lot, I was bloated from too many late night chocolate cereal binges, and I had no shred of hope that I was going to find anyone to relate to with my unruly hair of Italian decent and frantic self-involved doodling. That was, until I saw American Splendor.

Harvey Pekar was probably in his late thirties, living in the heart of Cleveland, Ohio. His balding head, his overweight and hunched physique intrigued me more than I care to admit. Not only was this my first introduction to such a surly character, but this also was my initiation with Paul Giamatti. His intense dark eyes spoke multitudes about his heart aching loneliness (Talk about a celebrity crush!).

In one of his darkest moments, he glanced at himself in the mirror and snarled,

As a sixteen-year-old insomniac chubster, it was like he was reading my diary. I was hooked.

Harvey Pekar was a pessimistic file clerk for a hospital in the late seventies through the eighties. With no prospects for fame, fortune, or love knocking at his door, he was selling jazz records on the side for some extra dough. On his many garage sale trips, he met an illustrator named Robert Crumb. (Does this name sound familiar to anyone? He started the underground comic movement with Fritz the Cat and Mr. Natural and is one of the most tragically bizarre people I have ever learned about. He is one strange dude. But FANTASTIC art.)

From there, a relationship was formed between Harvey and Crumb. Harvey’s enthusiasm for Crumb’s unconventional comics made Pekar, a man who could barely draw a straight line, create a storyboard of his life and therefore separate himself from his current state of affairs. Crumb offered to illustrate it for him and they took off running with a montage of special scenes made into comic form. From standing behind an old Jewish lady at the grocery store to the realization of how horny he is as he glances at a waitress’s breasts. Harvey Pekar’s stories were the every man’s stories. According to Pekar, “Ordinary life is pretty complex stuff.”

Luckily, his comic fame landed him a lady, Joyce (Hope Davis). I would have obviously dated him if he wasn’t a fictional character from the seventies and I wasn’t underage, but that’s another story. She with her self-diagnoses and activism, and he with his surliness and pessimism, they were quite a pair. She helped him through cancer and persuaded him to adopt a kid.

It gave me hope that I too could find my imperfect match.

Needless to say, I bought his comics off of eBay and devoured most of them. The comics were not only drawn by Crumb, but by several other artists depicting Pekar’s life with stinky lines, a lot of shadows, and the general gloom and doom Pekar was so attracted to.

Before going any further, I just want to say that I still adore this movie. Before it was for the introduction to a new, real, non-Hollywood-shiny character actor and the underground comic scene that made me feel extremely cool during high school. Now it’s for the campiness of the pessimism and real salt-of-the earth people displayed before the viewer. This movie consists of two parts traditional movie, one part illustrated, and one part documentary of the real life Harvey Pekar. These moving parts show glimpses into his real world, family and friends.

One of the characters that worked at the hospital with Pekar, Toby, is borderline autistic. With Judah Friedlander from 30 Rock taking the reins, he is a great reminder that all isn’t lost in the world. Toby loves Revenge of the Nerds and Piña Colada jellybeans. The real-life Toby was also on a segment on MTV’s Spring Break, with the voiceover of Pekar saying he didn’t like where things were heading. He felt people were being used, people were being made fun of.

In this reviewed view of one of my favorite life-changing movies, I see that Pekar is slightly flawed in all of his bitterness. Not only is he a character depicted in the movie American Splendor, but David Letterman used Pekar in segments of his show because of their sarcastic repartee. Showing real-life tapings was a treat, that was, until Pekar caught wind that he was being used as a pawn or character versus a real human being. This situation, on top of the drawn Pekar characters being slipped into the movie, it somehow takes away from the “Realness” and the quiet moments real humans have, and adds an element of kitsch I didn’t notice before.

Because this film contains documentary elements, it introduces his wife, the real Joyce, who is a severely toned down version (with a delightful bowl hair cut) of what Davis plays. She explains that Harvey likes to exaggerate the bad and leave out the good. “Isn’t that right, Harvey?” She asks, looking at him with slight agitation. The real Pekar shrugs and says, “Misery loves company.”

All in all, there are a lot of things happening in the movie that, had it been drawn out to paint a better picture, would have been double the length. It’s as if they highlighted all of his more famous comics then and cut and pasted them together. He wrote a whole graphic novel during the time of his cancer, showing his raw mortality, and that could have been its own movie in itself.

But with American Splendor itself, everything works well together. It’s genuine while being lively, exaggerated with illustrations and internal monologues. It’s actually really, really, tragically bittersweet and funny. It shows Cleveland and its dreary weather, the authentic people that fill up our lives, and the taste of success but never quite making it, as Harvey Pekar still had to work as a file clerk until his retirement.

P.S. Paul Giamatti, if you’re reading this, why did you never respond to my MySpace message I sent you in 2004? 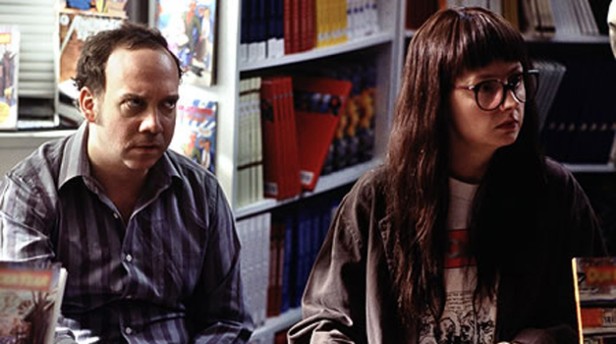