Professional television editor Betsy Cass reveals her love of Joaquin Phoenix (something the editors of this site share) and the unembraceable un-Americanness of Buffalo Soldiers. 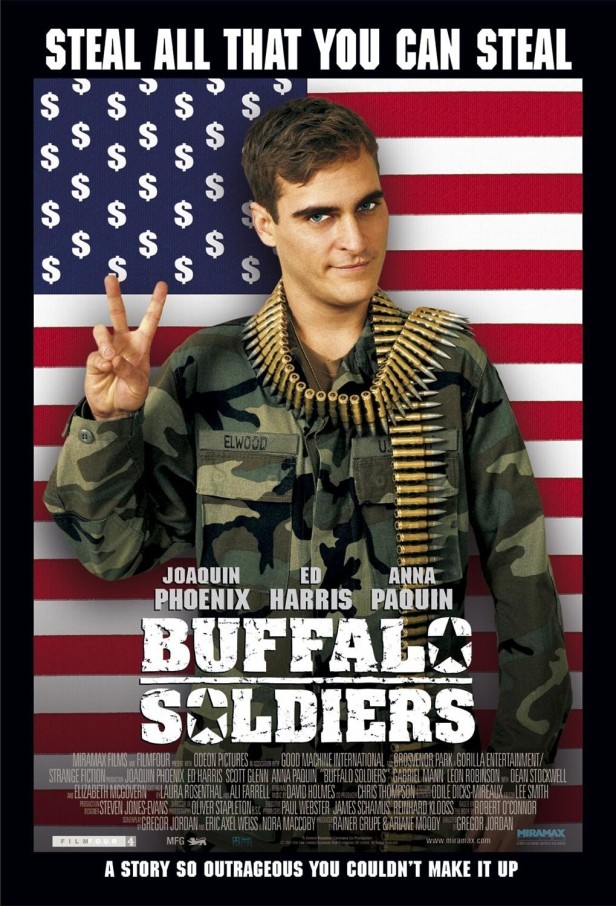 I’m having a hard time letting Buffalo Soldiers stand on its own.  Unlike any other film I can think of, it constantly forced me to recall other works, other filmographies, other cultural circumstances while I was watching it.  That’s not to say it’s attempting to reference the contextual elements I’m encountering.  In fact, far from it.  The film is satisfied to exist in its own self-contained corner.  But the world it creates is so small, and so specific, that it’s hard not to dwell on the context instead of the substance.

This movie would be easier to love without the baggage it carries.  If I didn’t know the actors, if I didn’t know the director, if I hadn’t waited years for it to come out, I could probably appreciate its merits as much as it deserves.  The movie is dark, and not in a funny way.  It’s just plain dark.  I didn’t expect that 10 years ago, and I didn’t fully remember it either.  The movie was billed as a subversive, yet jolly, comedy, like M*A*S*H or Stripes.  It’s hard to know whether that marketing move came before or after the decision to delay release of the film.  Even as someone who knew the movie was deemed too difficult to roll out in the wake of 9/11, I didn’t expect the film to be so . . . serious.  Sure, I was expecting something critical, flippant, possibly anti-military.  I certainly didn’t anticipate a fairly sober look at barracks ennui, the communist black market and race relations.  Rewatching it has certainly made me curious about the tone of the novel it was based on: does it tread the same line between morbidly depressing and able to find the farce in misery, or is that something the filmmakers discovered on their own?

It’s an unbelievably silly thing to say, but this movie doesn’t feel like it has an ounce of American in it.  I don’t mean that in regards to the political positions it takes, or more accurately, is accused of taking.  I just mean that it doesn’t really feel like any other modern, American movie to me.  If it had been Austrian, or French, or Danish, I could wrap my mind around it.  I could respect the honesty with which the film addresses the disappointments of life, the sometimes shockingly quiet ways it encounters devastation and depression and the wry humor it inserts, fully knowing that smirking at horrors doesn’t make them go away.  I could probably appreciate the subtle, almost non-present, yet charismatic work of the leading man.  But I can’t.  Maybe it’s because the movie is a little too glossy in its American production.  Predominantly, though, it’s because I can’t shake the context.

I’m sure half the reason I wanted to see “Buffalo Soldiers” in the first place was because it was causing political turmoil.  The other half was probably because of Joaquin Fucking Phoenix.  After it had been pushed back two years, and then finally released on video, it couldn’t live up to the anticipation I had.  I didn’t like it all that much, but I also knew it was one of those movies than I’d keep thinking about.  If I gave it time and space, the movie would change and I could come back to it with new eyes.  Instead, I came to it with a new set of expectations, this time artistic.  Since the movie was made, Phoenix went from being a talented young actor to a thespian heavy.  It’s easy to fantasize about how he’d play an anti-establishment, enlisted drug dealer in a pre-reunified Berlin.  Problem is, that’s not how he plays it.  From anyone else, the aloofness he brings to the role would be admirable and impressive.  I can’t even say that Phoenix made the wrong decision in the way he approached but role.  But with the pressure of recent history, it feels like a missed opportunity.

The film was also a major turning point for Australian director Gregor Jordan.  Coming off the success of his award-winning debut, this was the movie that could have made him an important player in Hollywood, or at the very least solidified a respectable career.  Instead, it was the beginning of the end.  Since Buffalo Soldiers, his films have been hated at best and straight-to-DVD-unheard-of at worst.  It’s hard not to watch the film while mentally mining it for Jordan’s talent, but those efforts come up maddeningly short.  It’s a film that feels like it could have been directed by anyone, or in a way, no one at all.  Like Phoenix, Jordan seems disengaged throughout.  The entire film exists in such a cool haze that you’re almost unsure what you’ve watched by the end.  Even a few minutes after finishing it, I felt more like I’d seen impressionistic strokes than a solid narrative.

Of course, I presume that’s sort of the point.  Because this film isn’t there to make sweeping political statements, or to stand as milemarkers in Hollywood careers, like I may have expected upon different viewings.  It feels like a ghost of a movie.  That’s because it’s about an empty man.  He may encounter “big issues” like abuses of power and racism, but the filmmakers aren’t there to address that.   And as much as the book is probably about a time and a place, the film is really just about being trapped and dead inside.  It’s distant and, as long as I sit on it, it will probably never be completely satisfactory.  It stands on its own in a way I find hard to digest.  It’s also in a way I sort of respect.

In a way, I like the movie better because I can’t fully endorse it.  I can appreciate it more knowing that it wasn’t just my mindset the first time around that left me disappointed.  It’s sort of valiant in the way it portrays everyday awfulness.  While it could just be a result of total artistic failure, I’d like to think the filmmakers worked hard to make something so unremarkable.  The amount of restraint it took, especially on the part of Phoenix, to turn a movie that probably should have been a rollicking comedy or a damning political discourse into a story about one very unhappy man is impressive, even if it is ultimately unembraceable.

Okay, so Joaquin Phoenix’s character does win in the end, and things basically end happily ever after for him.  But it oddly doesn’t seem to matter.  The film is so unrelentingly bleak that the two minute epilogue of “good karma” feels indescribably irrelevant.

While I firmly believe this movie got royally screwed, I don’t know if it ever could have been fully appreciated in 2001.  Even with a two-year delay, it was released into an environment completely hostile to it (for ridiculous and imaginary reasons), but I feel like it would have been better received, say, three decades prior.

Seriously, this movie is not a comedy.  Just because you laugh during a movie, doesn’t make it a comedy.  I know no one wanted to see a serious, critical film about the military in 2003, but the marketing disaster certainly didn’t do the film any favors.

Phoenix’s voice just sounds weird in the voice over.  Is that even him talking at the beginning of the film?  It must be, but how?

Speaking of voices, Anna Paquin’s annoys me so much.  She sounds like a 12-year-old.  My theory is that her vocal mannerisms froze at the point she learned how to do an American accent.

Ed Harris plays a total softie, and possibly the only completely redeeming character in the whole movie.  This is so against type, it almost feels like a joke.  That said, I sort of love him in the role.  He should play slightly idiotic, nice guys far more often.

Movies this movie made me feel like I would sort of rather be watching: Two Hands, To Die For, Beau Travail, 8mm, Tigerland. 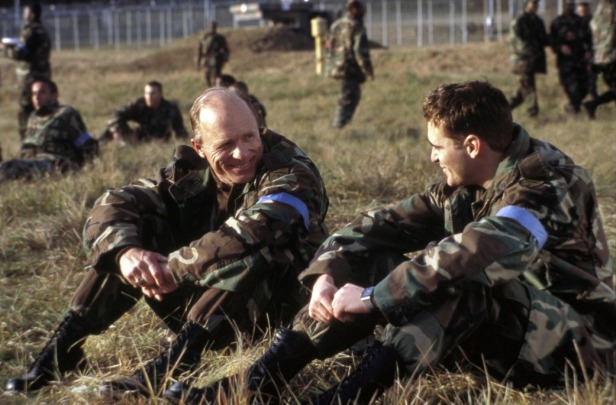