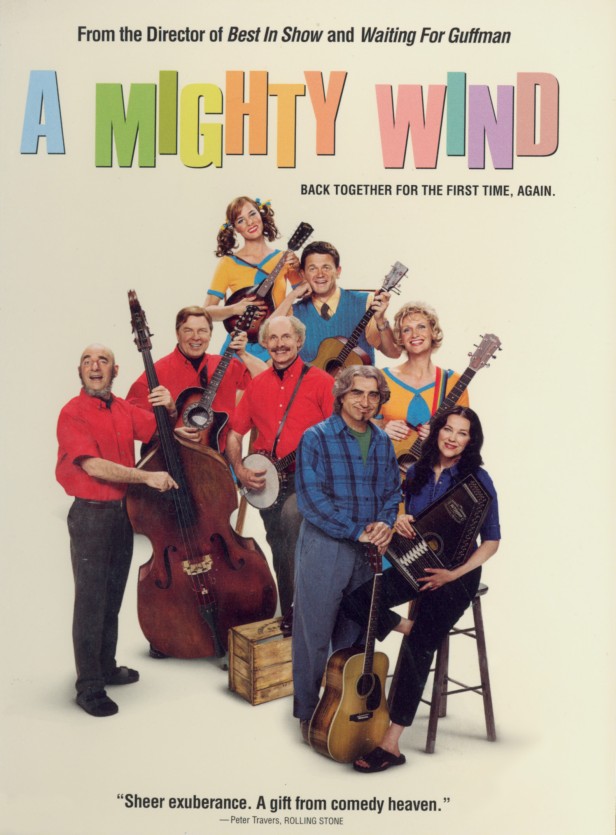 A Mighty Wind is the third and (as of this writing) final mockumentary directed by Christopher Guest, the man who brought you Waiting for Guffman and Best in Show. Following the formula of Guest’s previous films, an unseen documentary crew follows a group of performers (or dogs and their handlers, in the case of Best in Show) in the days leading up to a big, potentially life-changing show. The culminating show in A Mighty Wind is a tribute to the late Irving Steinbloom, a folk music producer. Three of Irving’s acts reunite at New York’s Town Hall to pay homage: The New Main Street Singers, The Folksmen, and Mitch & Mickey.

A Mighty Wind features many of Guest’s usual cast of players, and also musically reunites Guest with Michael McKean and Harry Shearer, his fellow bandmates from the eponymous This Is Spinal Tap (1984). The Folksmen—Guest, McKean, and Shearer—are actually twice reunited, The Folksmen being a faux folk (fauxk?) group that first appeared in a Saturday Night Live sketch in the mid-1980s.

At the center of the nine-member New Main Street Singers are Terry and Laurie Bohner (John Michael Higgins and Jane Lynch), a married couple who worship “an unconventional deity”: color, which they believe to be “saturated energy.” Also featured is Sissy Knox (Parker Posey), daughter of one of the original Main Street Singers and a former street urchin. The group’s sleazy agent, Mike LaFontaine (Fred Willard), keeps the Singers booked at theme parks and discount cruises, making them currently the most high-profile of the collected acts.

Then there’s Mitch (Eugene Levy) and Mickey (Catherine O’Hara), the sweethearts of the 1960s folks scene with their hit song “A Kiss at the End of the Rainbow,” punctuated by an actual kiss in each performance. The divorced couple haven’t seen each other in years, and Mitch has spent most of those intervening years institutionalized.

Though many of the same actors appear and Guest generally follows the same thematic formula that worked so well in Waiting for Guffman and Best in Show, there’s something lacking in A Mighty Wind: the movie just isn’t as funny or endearing as Guest’s other films. Particularly in Best in Show, Guest proved himself adept at juggling a large cast of characters and giving the audience an ample glimpse into multiple characters’ lives. Here, those glimpses are all too brief, giving the jokes a forced feeling. For example, Terry and Laurie Bohner identifying themselves as WINCs—Witches in Nature’s Colors—and the couple of cutaway scenes in which we see them worshipping colors feel like cheap sight gags as opposed to legitimate character development.

This seeming inability to scratch beneath the surface of these characters causes the film to drag. There is scene after scene of the various groups rehearsing, but nothing seems to really happen. The only real attempt at building tension is the question of whether or not Mitch will be able to perform, but this conflict is more told than shown: we see Mitch and Mickey rehearsing well together, then we’re told Mitch has locked himself in his hotel room, then he’s been talked out of the room in the next scene.

A Mighty Wind is by no means a bad movie, but it is a rather slight movie that’s less about the comedy and more about the music. There’s nothing wrong with that per se, but there’s little story here to justify a full-length movie as opposed to putting together something more conducive to showcasing the music.

The detailed mythology of the faux folk music scene that is laid out early in the film is impressive, but I can’t help but think that the audience is missing out on a better story than the one we’re about to receive.

Mickey’s husband, Leonard Crabbe, is another figure with many quirks in search of a real character. He’s a “model train enthusiast” who has included a brothel in his model village and is in “the bladder management industry.”

The endless rehearsal scenes get old fast, but I’d say the worst offenders are The Folksmen. Their scenes play out just like music rehearsals with questions of key and pitch and blah-blah-blah.

Fred Willard’s Mike LaFontaine is very similar to the character he played in Best in Show, but there’s something mean-spirited about his character here that makes the performance fall short. Particularly crass is a swingers joke he tells at the small awards ceremony hosted by the deputy mayor: “Have you met my wife? Your honor!”

Ed Begley, Jr.’s character is another head-scratcher. He plays Lars Olfen, the head of the Public Broadcast Network who will be broadcasting the reunion show. Lars tells us he had a minor hit with his garage band back in Sweden called “How’s it Hangin’ Grandma.” He also launches into a long string of Yiddish phrases. Why this ostensibly Swedish man makes with all the Yiddish is beyond me: it’s never explained.

One of my favorite lines in the movie is a bit of a throwaway. The Folksmen are on their way to the New York hotel they’ll be staying at and find themselves lost. Guest tells his bandmates that he has a map, but he doesn’t have it with him. McKean asks—in his classic McKean straight-faced sarcastic way–if he plans on “studying the map later, academically?”

Jennifer Coolidge and Larry Miller appear as Public Relations specialists for about five minutes of collective screen time. This didn’t stop marketing from playing up Coolidge and Miller in the film’s trailer. Coolidge sports an inscrutable accent and a curly brown wig. Miller does his patented Miller squint and schtick.

Michael Hitchcock’s theater manager character is another one that falls a bit flat. His interactions with Bob Balaban’s clueless Jonathan Steinbloom have a bit of awkward humor to them, but it seems they didn’t know what to do with the character, so he ends up smacking Steinbloom over the head then disappearing from the movie.

The music isn’t bad at all, particularly considering folk music isn’t exactly my scene. I’d say The Folksmen are the most talented, but, then again, they have had the most practice at it.

The finale of the show is a performance of “A Mighty Wind” which ends with the line “it’s blowin’ you and me.” A cheap laugh tacked onto the otherwise played straight musical performances.

4 thoughts on “Ten Years Ago: A Mighty Wind”